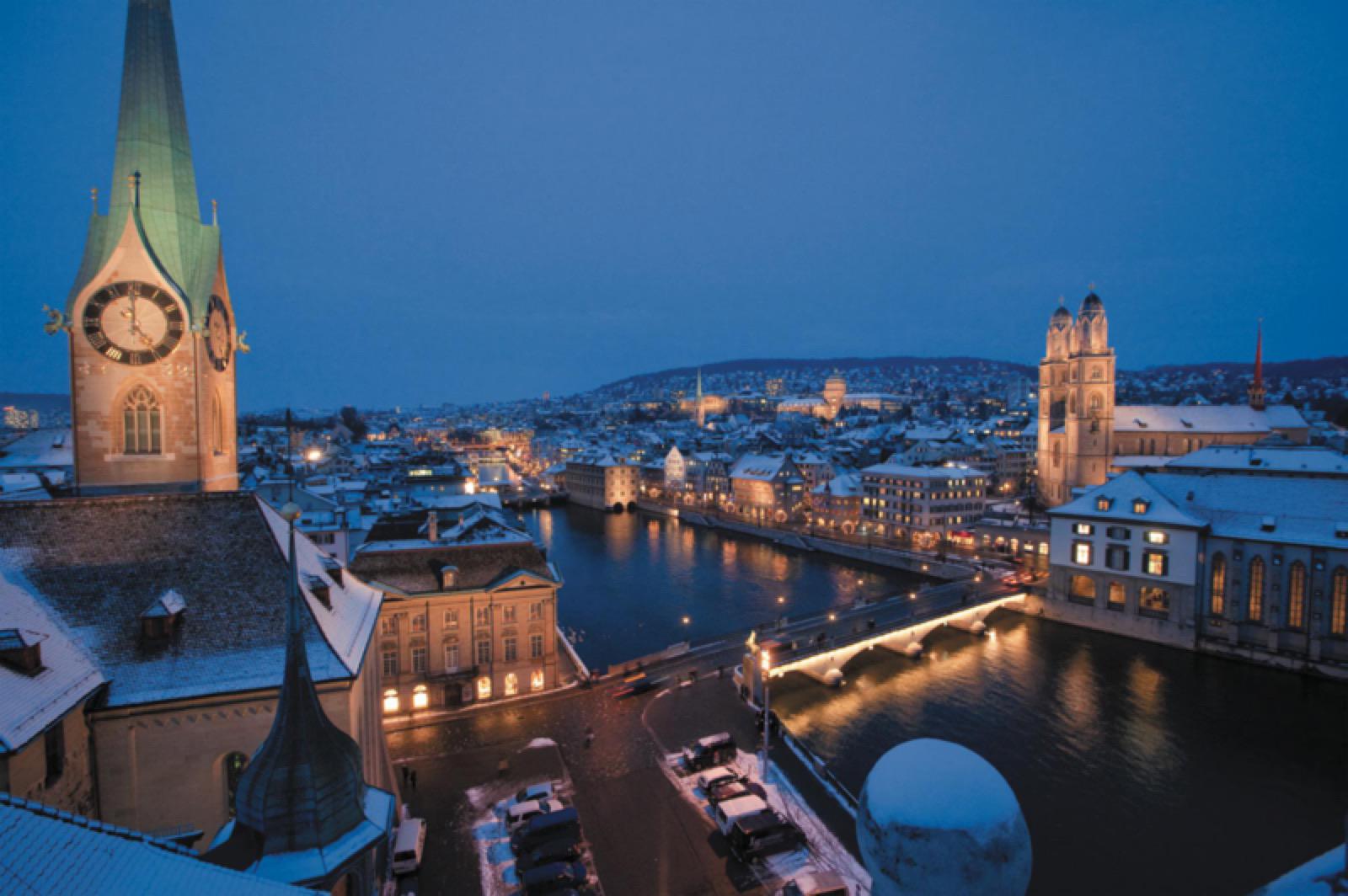 Located in north-central Switzerland, the city of Zurich is the country’s largest town with a population of 400’000 inhabitants within the municipality, and over 1.8 million in the Zurich Metropolitan Area. Since it was earliest mentioned in 15 BC as roman-founded “Turicum,” the city became Switzerland’s most important economic and cultural centre. Being home to many financial institutions, Zurich holds a place among the world’s leading financial centres. But also culturally, Zurich has much to offer for its residents as well as visitors. Besides a bustling nightlife and a vibrant restaurant and bar scene, the city houses many museums, art galleries, and is hosting cultural events the whole year round. 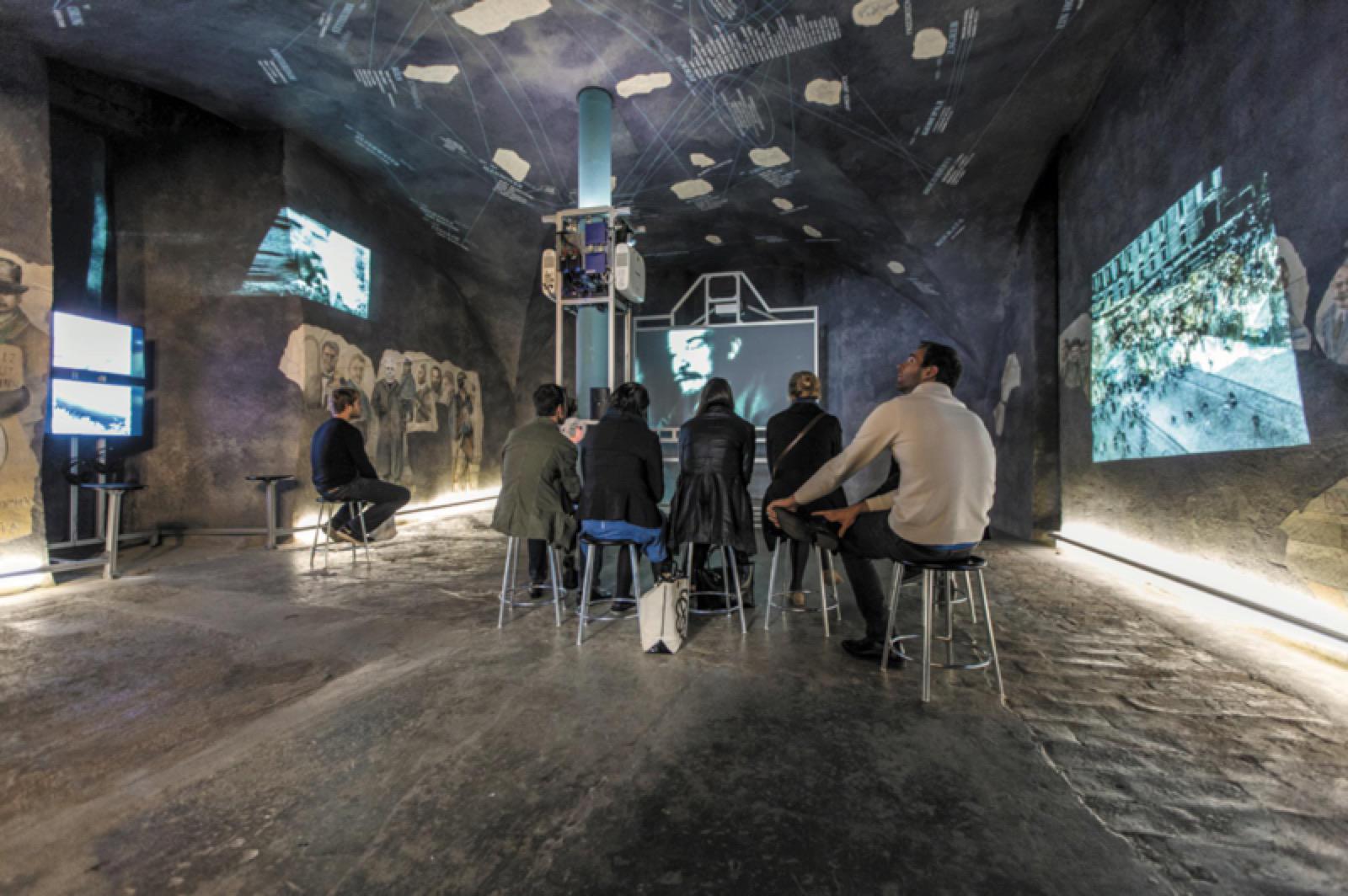 Art aficionados definitively get their money’s worth in Zurich. The Zurich Museum of Art (Kunsthaus Zurich) holds one of the world’s largest collections in classical modern art with displays by Munch, Picasso or Giacometti. The Swiss National Museum is located next to Zurich’s Central Station and presents Switzerland’s cultural and historical background, while the renowned Museum Rietberg specializes in Asian, African, American, and Oceanic Art.

For engaging performances you can visit Cabaret Voltaire , where in 1916 Dadaism was founded, and further the Zurich Opera House or the Schauspielhaus Zürich , which are both leading European institutions in their respective fields.

If you like to get to know the city in an active manner, you may join one of various (sometimes free) walking tours . There are tours focusing on various aspects of the city, with offers ranging from pub-crawls, and food tours (quite a pricy adventure) to historical, business, or even running tours (being somewhat fit is an advantage here). However, it is also very thrilling to discover the city on your own by taking a stroll through Lindenhof and Niederdörfli (historic centers), or along the shores of the river Limmat and Lake Zurich. To get a 360° view on the city, you may want to visit the bar or the restaurant on the top floor of the highest building of Zurich, the Prime Tower . 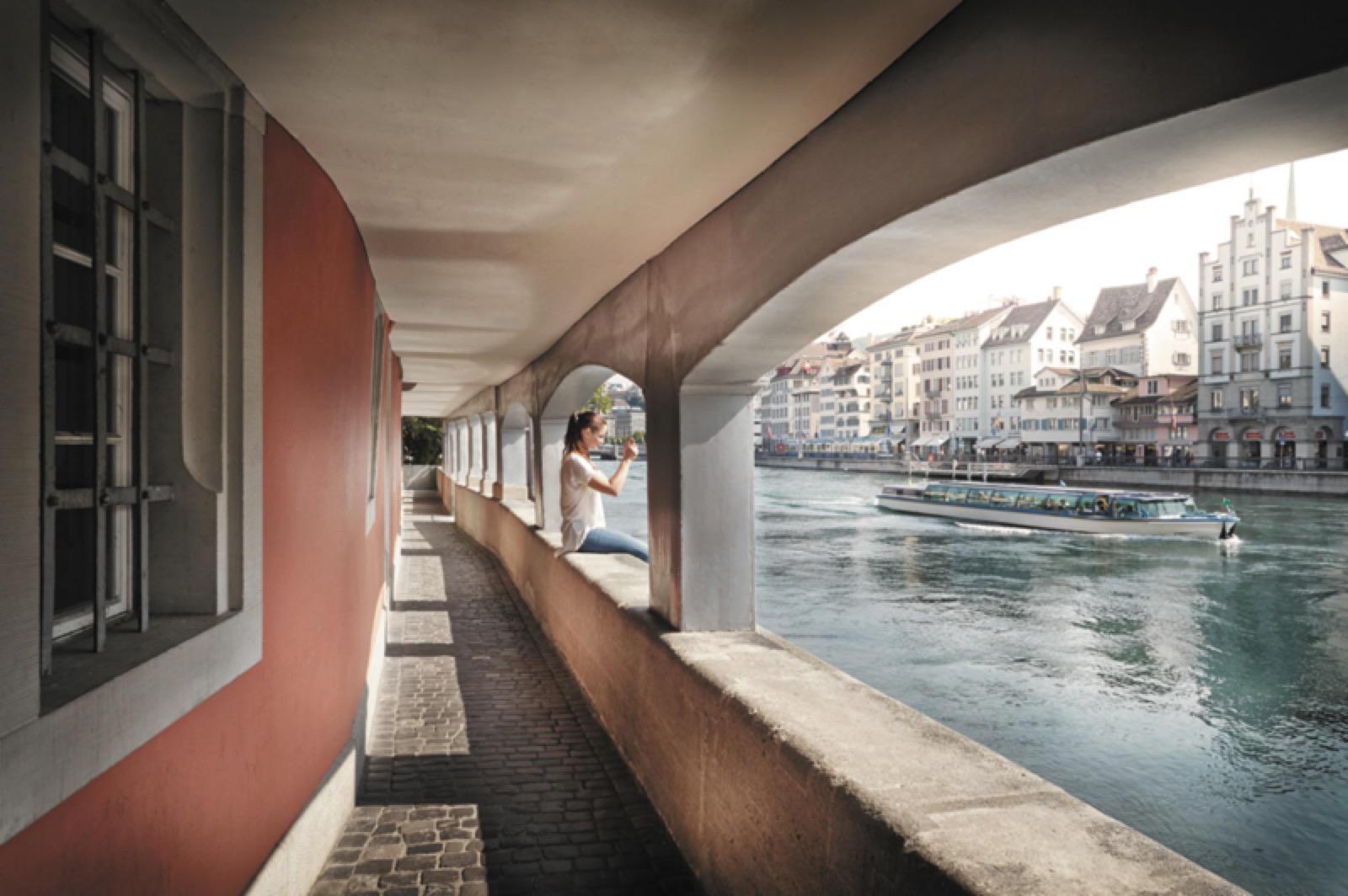 They say Zurich is a shopper’s paradise. Whether you are interested in high-end fashion and haute horlogerie from boutiques along world-famous Bahnhofstrasse, or to go treasure hunting for bits and bobs in little shops in the Niederdörfli or at flea markets, Zurich will not disappoint.

Two great coffee places for enjoying, relaxing, and working are Café Henrici and Apotheke (close to University of Zurich).

Other leisure activities include visiting the Üetliberg either by hiking up or conveniently taking the train from the Central Station. It offers panoramic views of the city and the lake. Also popular are ship cruises on the lake and for the more active ones to visit the ice rink next to “The Dolder Grand Hotel.” Zurich is also ideally located for day-trips to Lucerne, Basel or Bern, which can be reached within an hour by train. Also, a great skiing resort can be reached within the same distance (Flumserberg). 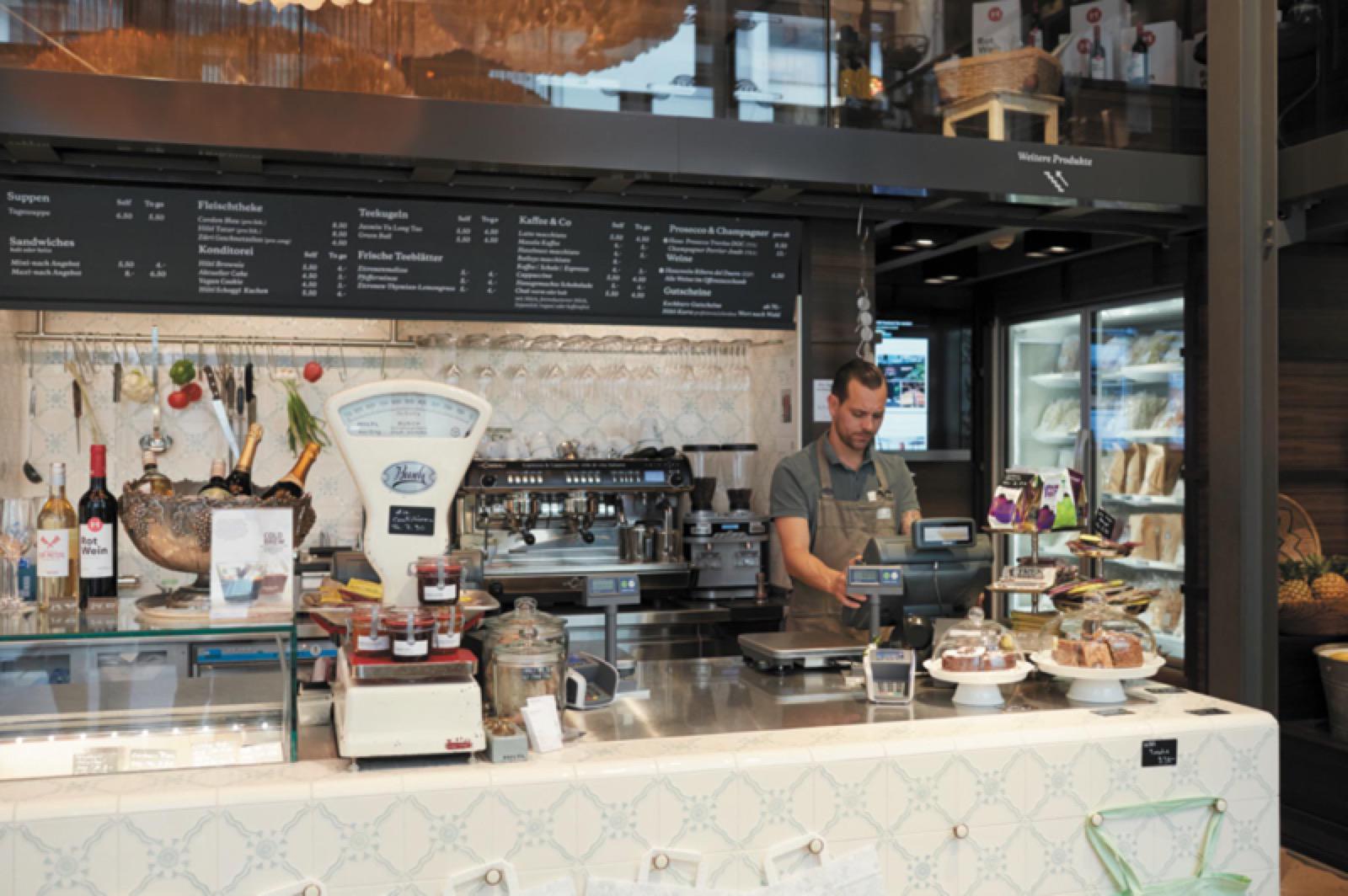 It is difficult to make choices among the many and diverse restaurants Zurich offers. From street food to Michelin-rated gourmet temples, from American to Japanese cuisine, Zurich has it all. For lunch and not too expensive dinners the restaurants in the Niederdörfli are a good choice, as they are located in the vicinity of the university. Among the most famous restaurants and eateries in Zurich are Hiltl (the world’s oldest vegetarian restaurant, $$) and Kronenhalle ($$$$) where you can dine on Swiss and International dishes among authentic works by Chagall, Mirò or Matisse.

If you would like to mingle with the young and hip, you may consider having dinner at Maison Blunt ($$), which serves Moroccan and Middle Eastern dishes and is located near Langstrasse (Zurich’s notorious night life hotspot). The Holy Cow! ($) has many fans (also among the staff of our chair) and is conveniently located near the University of Zurich. It serves a huge variety of burgers – many say the best in town. Located close to the University of Zurich, Zum Alten Löwen ($$) is a very authentic neighbourhood restaurant and represents the modern Swiss kitchen with a focus on local dishes and ingredients. Another down-to earth tradition are the city’s beer halls, mostly located in Niederdörfli (e.g. Rheinfelder Bierhalle ($)). 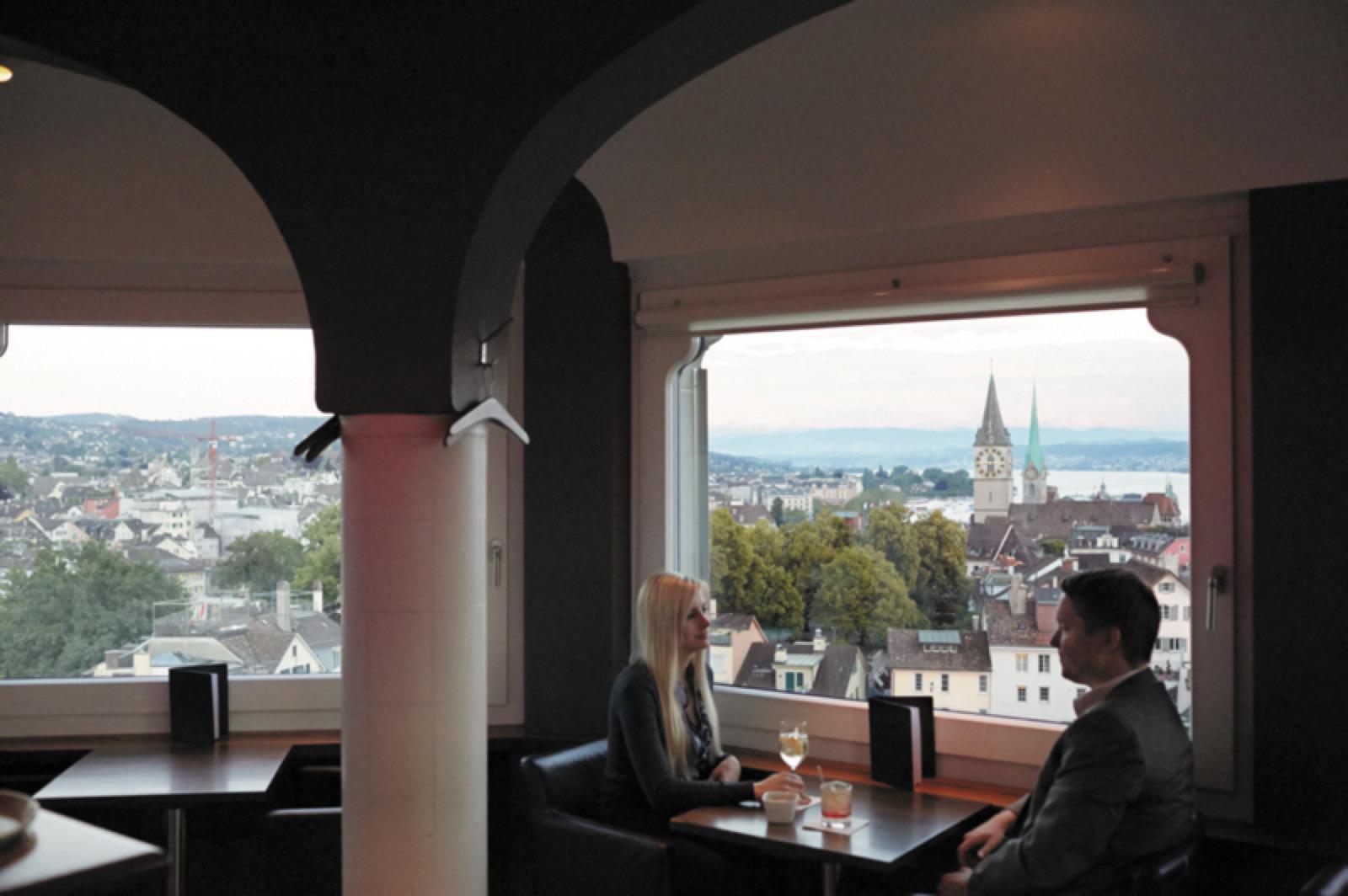 Whiskey lovers and those who appreciate a fine bar with live Jazz have to visit Widder Bar , which is the home of Zurich most extensive ‘Library of Spirits’. At Jules Verne , a bar located just underneath Zurich’s astronomical observatory, you get the best views of the city while sipping on an incredible Basil Smash.

If you have not yet seen enough of Zurich you should throw yourself into the city’s nightlife, which usually starts at midnight and ends at sunrise. Generally, the dance halls are scattered all over the city, but the concentration is highest in Zurich West and the district around Langstrasse. Here, Bars and Clubs are lined up on both sides of the street with some restaurants and fast-food outlets in between. Bagatelle 93 offers diverse and mainstream music in a bar-like setting. Zukunft is a diverse nightclub where you can enjoy futuristic sounds to dance the night away.